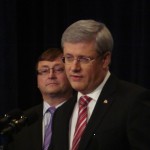 The Burlington Conservative Association welcomed Prime Minister Stephen Harper to Burlington in December 2012 to officially open the Burlington Performing Arts Centre. MP Mike Wallace formally welcomed the Prime Minister to the city and joined him during a news conference where wide ranging questions were posed by members of the parliamentary press gallery who follow the countries leader on all trips and representatives from the local media. Wallace was a member of Burlington’s council when plans for the centre were conceived and later as the city’s representative in Ottawa helped arrange federal funding for the project.