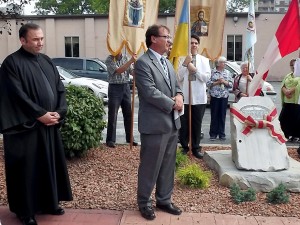 Thousands of men, women and children were branded as “enemy aliens” and many were interned, forced to do heavy labour for the profit of their jailers, not because of any wrong they had done, but only because of who they were or where they had come from. They came to Canada with passports identifying them as citizens of the multinational Austro-Hungarian Empire. Twenty-four camps were established across Canada.

“I am honoured to be part of this commemorative ceremony where we are witnessing a national wave of remembrance, and thank Holy Protection of the Blessed Virgin Mary Ukrainian Catholic Church for accepting this plaque on behalf of our community,” stated Wallace.

The plaque depicts internment prisoners confined behind a wire fence at the Castle Mountain Internment Camp in Banff, Alberta.