The Party has now opened nominations in our riding as of Monday September 28th, 2020.

BCA is hoping for a Nomination Race this time around. We want our members to choose the new Candidate to run in the next election and to make the Burlington Riding a ‘Conservative Riding’ once again!

Our BCA Candidate Nomination Committee is actively seeking qualified people to become Nomination Contestants for the riding of Burlington. 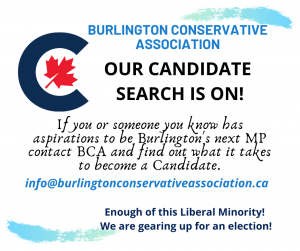 Help us make sure we have a race!

If you know of anyone who is interested, please have them CONTACT US and our Candidate Nomination Committee will be in touch!

With a Liberal Minority government threatening to call a snap election, we want to be ready when the time comes!

The NEW RULES are out!

Applications forms are now available to any potential Nomination Contestants.

Here is an excerpt from the rules:

i. Be familiar with and respectful of (a) the Constitution, (b) the National Policy Declaration of the Conservative Party of Canada, (c) the Rules and Procedures for Candidate Nominations and (d) the Code of Conduct for Volunteers, Campaign Staff and EDA Staff;

ii. Be forthcoming about any past or current activities that might negatively affect the ability of the Nomination Contestant to be a credible Conservative candidate in a general election or byelection. Such activities include, but are not limited to, having a criminal record, being the subject of allegations of misconduct – criminal, sexual, professional or otherwise, having expressed opinions that are not representative of the principles of the Party, or having filed for personal, or business bankruptcy.

iii. Demonstrate a knowledge of the factors and an approach that may result in a successful election campaign, including a person’s ability to engage and communicate with voters, recruit and retain members to the Party, build a campaign team, fundraise and serve as a Member of Parliament with integrity.

With the new rules, we now await the Party’s decision to issue the ‘CLOSING NOTICE’ for our riding. This can come at any time! When that notice is given to our membership, then there will be a 14 day time span for applicants to submit their completed applications to the Party.

At the END of the 14 DAYS, if there are 2 or more Contestants that have had their applications accepted by the Party then Burlington will have a Nomination Race. If there is a race, the membership gets to choose the new candidate. NOTE: during the 14 days the Burlington EDA  Candidate Nomination Committee (CNC) – that will interview applicants and make recommendations to the Party. If there is a RACE with a VOTE, the CNC will run the Nomination Race. See all the CNC details in the new rules.

If at the end of the Nomination period there is only 1 Contestant that has been accepted by the Party, then that person will be acclaimed as Candidate and there will be no race.

Jane Michael is the current Candidate of Record, until we have gone through the process above to select a Candidate to represent our riding for the next election.