DETAILS WILL BE POSTED SOON.

The next Conservative Convention is going to be held virtually!

Not only that, but we’re going to have it a bit earlier than previously announced, so hold March 18 to 20, 2021, because that’s when Conservatives from across Canada will gather online for our next convention. 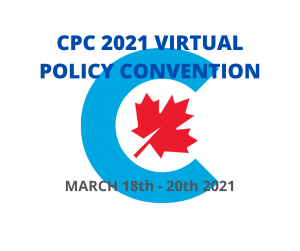 By holding it a bit earlier, it also ensures we’re able to gather your feedback and build that into a platform for the next election. In a minority Parliament, that election could come at any time, so having this in March means we have that opportunity to hear from you before the platform is finalized.

Of course, you can expect all the same highlights as conventions of past including voting on constitution amendments and policy, National Council elections, training, guest speakers, and much more.

Obviously, the uncertainty around COVID-19 is what first caused us to shift our convention, and what caused us to hold the Leadership event virtually as well. That uncertainty remains, and that makes it difficult to plan something to the scale of our in-person conventions where thousands of people come together under one roof.

We’re looking forward to having an in-person convention again in the future, and National Council decided the next convention in 2023 will take place in Quebec City.

As we get closer to this coming March, we’ll tell you exactly how to take part in our virtual convention, what more to expect, and any other details you need.

We want to thank all those that took part in our summer survey about the convention to help give National Council the feedback we needed to inform this decision. Many of you supported the idea of a virtual convention if a large gathering like our traditional conventions would not be possible under current restrictions.

I’m looking forward to seeing you again soon – virtually! – and working alongside you to ensure our leader, Erin O’Toole, is armed with all the feedback from members he needs to build a platform that shows Canadians we’re a clear alternative to these Trudeau Liberals, and we will bring back the ethical, compassionate, and intelligent government Canada deserves.