The Good, the Bad and the Unknown: Canadians assess cabinet performance at the two-year mark

November 20, 2017 – “In parliamentary tradition, prime ministers are sometimes referred to as primus inter pares, Latin for “first among equals” relative to other members of their cabinet.

But the latest public opinion research from the Angus Reid Institute indicates this country’s federal cabinet ministers are hardly equal when it comes to recognition or awareness among Canadians.

Of 30 cabinet members, two-thirds are unknown to at least half the country. Indeed, they are so unrecognized that respondents were unable to render any opinion on whether these ministers of the Crown are doing a good or a bad job.

Among the better-known ministers, those responsible for trade, public safety and defence receive the highest marks. On the other end of the scale, months of criticisms over policy, performance and public transparency has put the finance

minister at the back of the pack. Notably, not one member of cabinet receives a “good job” designation from more than 50 per cent of respondents.” from Angus Reid Report, ‘The Good, the Bad and the Unknown’

“The least well-known member of the cabinet is Minister of Democratic Institutions, Karina Gould, of whom only 29 per cent of Canadians offered an opinion.” from Angus Reid Report, ‘The Good, the Bad and the Unknown’ 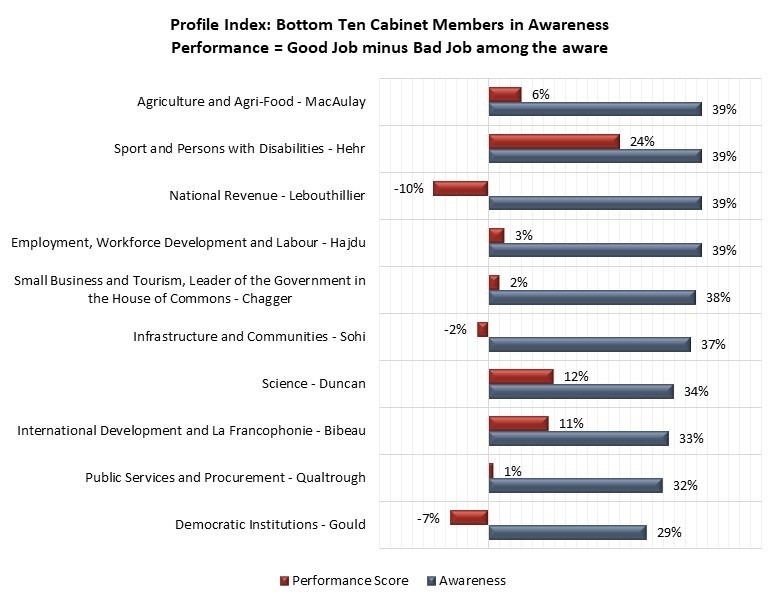 This graph is from The Angus Reid Institute (ARI) report entitled ‘The Good, the Bad and the Unknown’