Now in 2019 the Juno Beach Centre is celebrating Juno 75!

Lise Cooper’s son, Don Cooper will be a special guest speaker at our Veterans’ Appreciation Dinner on Thursday, June 13th. Don is now President of the Burlington Juno Beach Association. He will speak on the Juno Beach Centre. Details here.

Born in Midland, Ontario, Garth Webb spent his youth in Calgary, Alberta. In 1942, he joined the Royal Canadian Artillery serving in “C” Troop of the 14th Field Regiment.

On the morning of June 6, 1944, Lieutenant Garth Webb landed on Juno Beach in Normandy with the Canadian 14th Field, as part of the Allied forces. Despite experiencing significant losses on D-Day, his unit continued their advance over the months that followed though Northwestern Europe and eventually Germany in 1945.

After the war, Garth Webb returned to Canada and resumed his studies at Queen’s University in Kingston, Ontario. Upon graduation, he embarked on a successful career as a real estate broker and appraiser.

In June 1994, for the 50th anniversary of D-Day, he returned to the beaches of Normandy with many of the veterans from his unit. It was at this point that they realized there was not very much present for their children and grandchildren to see in commemoration of the Canadian involvement in the Second World War.

As a result, Garth Webb and his partner Lise Cooper spearheaded an initiative of Canadian Second World War veterans, widows and children of veterans to create and establish the Juno Beach Centre.

Garth Webb and the Juno Beach Centre Association (JBCA) dedicated themselves to promoting this cause and fundraised to build the Centre on land made available by the Town of Courseulles-sur-Mer thanks to former Mayor, Jean-Louis de Mourgues. On June 6, 2003, surrounded by hundreds of Canadian veterans and dignitaries, they celebrated the official opening and unveiling of this amazing accomplishment – a lasting tribute to the efforts and sacrifices of all Canadians during the Second World War.

After the opening of the Centre, Garth Webb continued to serve on the Board of Directors as President of the JBCA in Canada. Until his passing on May 8, 2012, Garth Webb worked tirelessly for the Juno Beach Centre.

In addition to his many commendations and military medals from the Second World War, Garth Webb was also the recipient of the Meritorious Service Cross. It was presented to him in 2003 by the Governor General of Canada for his part in the creation of the Juno Beach Centre. This prestigious award recognizes a deed or an activity that has been performed in an outstandingly professional manner, or with uncommonly high standards; the activity is often innovative, sets an example for others to follow, improves the quality of life of a community and brings considerable benefit or honour to Canada.

Below is an article from the Burlington Post from 2010 when Burlington’s Juno Beach Centre Association office first opened. 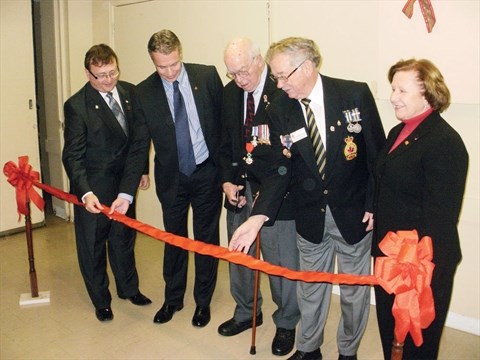 “I think I have the highest rejection file in Canada,” said the Juno Beach Association president.

“Corporations like to spend money where people can go see how they spent it. That was not going to happen in France.”

It was held to welcome the association to its new office at the legion.

He called Webb ‘the founding father’ of the centre, which opened in France June 6, 2003, exactly 59 years after D-Day.

“Many of us thought the whole idea was a pipe dream,” said Richardson, “but Garth Webb is a man of great determination, remarkable ingenuity, persistence and old-fashioned hard work.”

The longtime Burlington resident and his partner Lise Cooper spearheaded the project after visiting Normandy many years ago.

“We quickly learned there was nothing to show our children or grandchildren about World War Two except for a few markers,” said Webb.

Walmart joined up and Webb flew to France to star in their Juno Beach Centre TV ad.

“We got to be famous and it was damned good for them,” he said.

Webb groused about fake giant cheques at presentations, so then-Premier Gordon Campbell gave him a real $1 million cheque on behalf of British Columbia.

“It was scary. Lise carried it in her purse for two more days,” recalled Webb. “We figured it was glued to her.”

He said veterans and citizens donated more than $2 million, recognized through brick memorial kiosks at the centre.

“This thing wasn’t built by two or three rich governments,” said Webb. “It was all the people combined.”

He recalled the centre opening and a speech where he and Lise were to alternate lines in English and French.

“None of our friends said I made a good speech,” said Webb. “All they said was, ‘You missed a line.’ ”

“I was in the artillery and in charge of firing four of those,” said Webb.

There was a D-Day photo of him and two soldiers standing in a shelter which made the Calgary Herald’s front page.

Webb was an artillery man with the 14th Field Regiment during the invasion. “Ten guys from our regiment died on D-Day,” he said.

Thousands of Canadians participated in the massive D-Day battle, with many killed, wounded or taken prisoner at Juno Beach.

The invasion enabled the Allied forces to advance through continental Europe and liberate countries occupied by Nazi Germany.

For more information about the centre and its memorial brick donation program, call 1-877-828-5866 or visit www.junobeach.org.