Parties ramp up fundraising to cope after ‘big hiccup’ of pandemic, with a modified ‘return to normal,’ say experts

Given ‘all the different hints’ of an early election call, Burlington Conservative riding association head Ross Noble says his team is looking to expand its fundraising efforts, with different formats and larger groups.

As parties adjust to the new normal of operating amid COVID-19, the threat of a fall federal election is a “convenient” reason to resume ramping up digital fundraising efforts, prompting a modified “return to normal,” say experts.

Speaking to The Hill Times last week, Dean Tester, president of Tester Digital, noted the pandemic “made things a little bit more difficult” as parties halted or postponed fundraising events in its the early months after COVID was declared a pandemic in March.

“But now, I think it’s more or less back to normal,” Mr. Tester said last week. “Most of the money, I think, still comes from direct mail, phone calling, and digital fundraising, and all that stuff I think is full steam ahead for these guys now.”

The Liberals, Conservatives, and NDP all were reported to have applied for, and received, the Canada Emergency Wage Subsidy. The Conservatives, under new leader Erin O’Toole (Durham, Ont.), have since ended the subsidy and have indicated plans to repay it, while the Liberal Party indicated it would no longer be applying for it come the end of August.

The Trudeau government will soon face a confidence vote following its Sept. 23 speech from the throne. Most party leaders are now saying they don’t want an election this fall, but will be ready in the event there is one, leading to a ramp up in fundraising efforts. …

Ross Noble, president of the Burlington Conservative Association, told The Hill Times he is “very confident that with the current fundraising that is taking place and continuing to take place, we’re going to be in a very good position” in the case of a fall election. 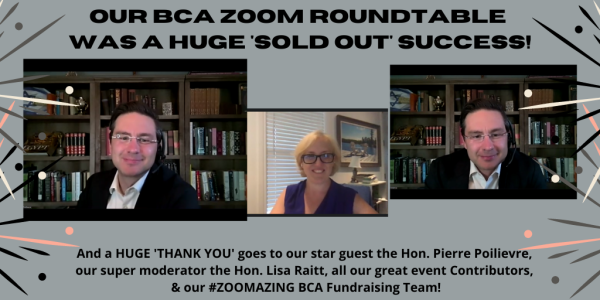 While the virtual event was a first for his association, Mr. Noble said he saw benefits, noting it was much easier to schedule. “We hadn’t run a virtual fundraiser before,” he said in a phone interview last week, of the event that saw 25 donors take part. “It did what it was supposed to do, and it helped us line up some of our efforts internally as to how to run those things and what works, what does not work.”

Mr. Noble said the group was able to “hit the target it was looking for,” as the event was advertised at $150 per head. Given “all the different hints,” he said the association is looking at holding other events under different formats and with larger groups.

He said his association “is in very good shape,” as “more than two” people expressed interest in running for the party’s nomination in the riding even before the results of the leadership race were announced, and membership has nearly doubled over the last year and a half.

Read the entire article from The Hill Times here: https://www.hilltimes.com/2020/09/16/parties-ramp-up-fundraising-to-cope-after-big-hiccup-of-pandemic-with-a-modified-return-to-normal-say-experts/263595